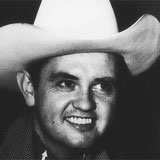 Listen the tunes on SoundCloud

All the Michel Lelong’s english guitar lessons on Merle Travis, Chet Atkins and Jerry Reed styles was published by Stefan Grossman’s Guitar Worshop in the 80’/90′.
Notice: The tablature/music are in PDF and the audio files in mp3. You will receive the material by e-mail.

The Guitar of Merle Travis – Vol.I 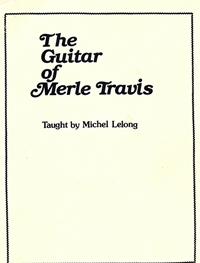 Merle Travis was the founding father of country fingerpicking. He set the standards for this style. His guitar playing is very challenging. It ranges from the melodic alternating bass arrangement of Nine Pound Hammer to the finger-twisting impossibilities of Walkin’ The Strings. These six lessons cover the full breadth of Merle’s techniques with an exciting selection of 13 arrangements. For the intermediate to advanced student. 65 page tab/music book.

Travis’s basic right hand technique with damping, syncopation and left hand fingerings. I Am A Pilgrim and Nine Pound Hammer both in the key of E are discussed.

Merle Travis was a master of blues guitar. This lesson features Fuller Blues and Canebreak Blues both played in the key of E.

Incredibly fast fingerpicking solos were a trademark of Travis’s playing. Cannonball Rag in the key of G was one of these great instrumentals. Tuck Me To Sleep In My Old Kentucky Home played in the key of C illustrates a very inventive playing approach. Several variations for both songs are discussed.

Jazz standards played an important part in Merle Travis’s repertoire. I’ll See You In My Dreams and Memphis Blues are fine examples.

Saturday Night Shuffle is an original Merle Travis instrumental that has become a standard in the fingerpicking world. Walkin’ The Strings completes our series with a tour de force in the walking bass technique. 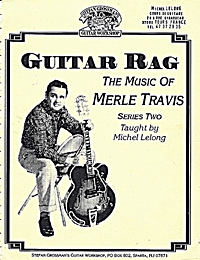 Michel Lelong has prepared a second series that focuses on the incredible talents of the legendary Merle Travis. In this three cassette series, Michel presents six arrangements that will provide you enjoyment as well as challenging your fingerpicking skills.

Muskrat Ramble is an old New Orleans tune that Merle plays in the key of A. Guitar Rag is a Travis original played in the key of E. Variations on the arrangement are presented.

The folk/blues Midnight Special, played in the key of E opens our last lesson. Twelve variations on the theme are taught that will provide you with many ideas, tricks and hot licks on how to play Travis’s blues in A. Merle’s famous Blue Smoke concludes this series.